A Little Progress Report from Nurbuling

by neio
All Categories, Projects

The children are our future.  We must pass down the best possible knowledge of the current generation and also empower them the ability to think and to innovate in the world that has become ever so fast-paced and ever changing through globalization.  Most importantly, our generation is also responsible to pass down the most-up-to-date education on sustainable technology as we are already facing the challenges of limited and exhausted natural resources. 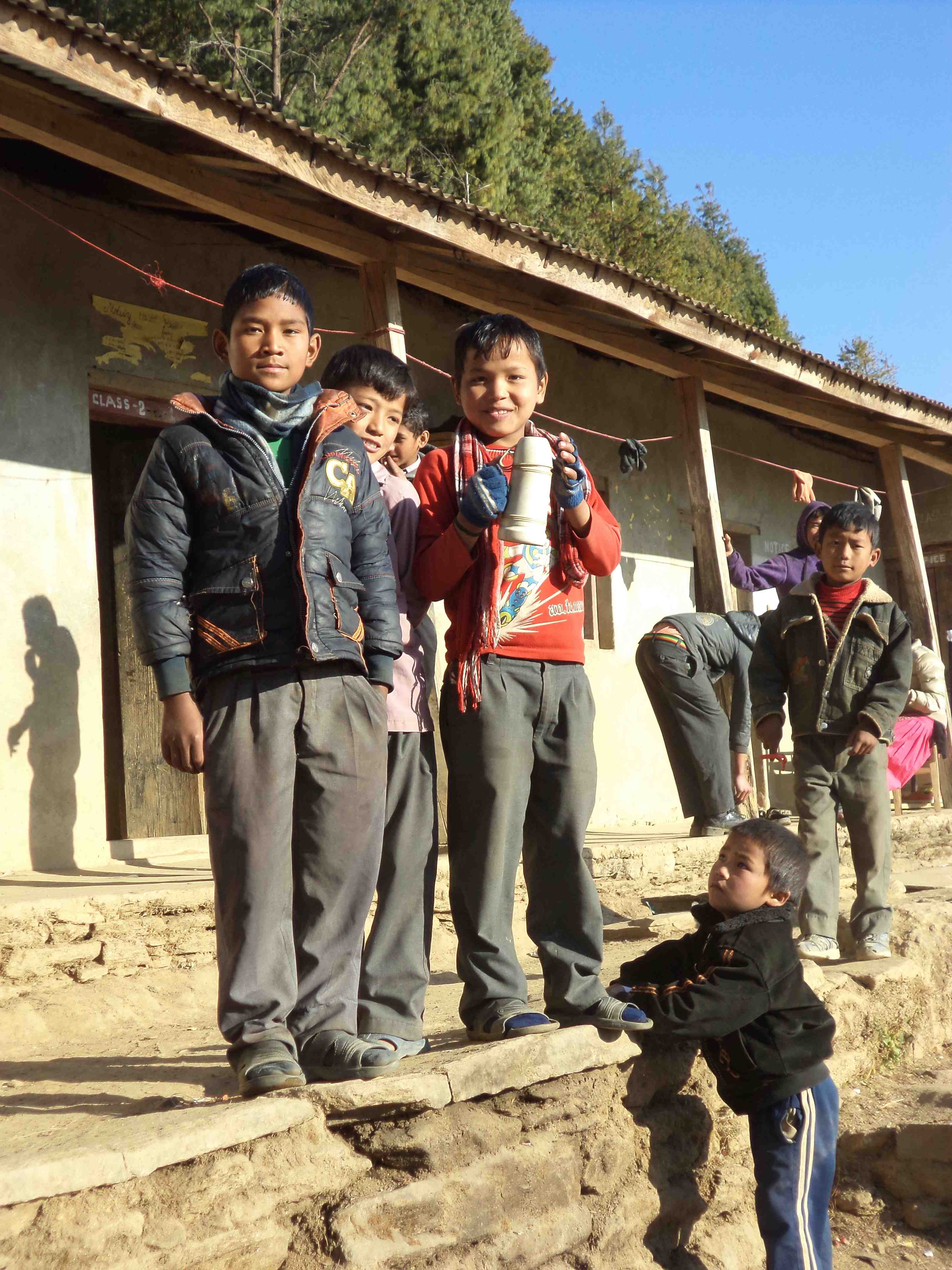 Back at the time when I still lived in the San Francisco bay area, I fortunately had the opportunity to meet Wayne Cheung, who is the founder of the Nepal Education Initiative Organization (NEIO).  I was happy to learn that the vision of NEIO is on improving the way of life through education, so that the children in the remote Nepali village are empowered with the necessary knowledge and tools to create a world of their dreams if they choose to.  When I pitched my idea of sustainability to Wayne, he has graciously given me an opportunity to take on a sanitation project in Nurbling School.

The goal of the Nurbling sanitation project is to improve hygienic health of the school children by constructing a facility that has toilets, hand wash stations, and showers.  Based on the 2011 Nepal Sanitation and Hygiene Master Plan, more than half of the country’s population still lacks access to a toilet.  More than 700,000 children have died due to poor hygiene and sanitary conditions in the last decade.  72% of the people have disease due to unsafe drinking water and poor sanitation, and 90% of the people have worms at any given time.  The statistical data reveals a desperate need for improvement. 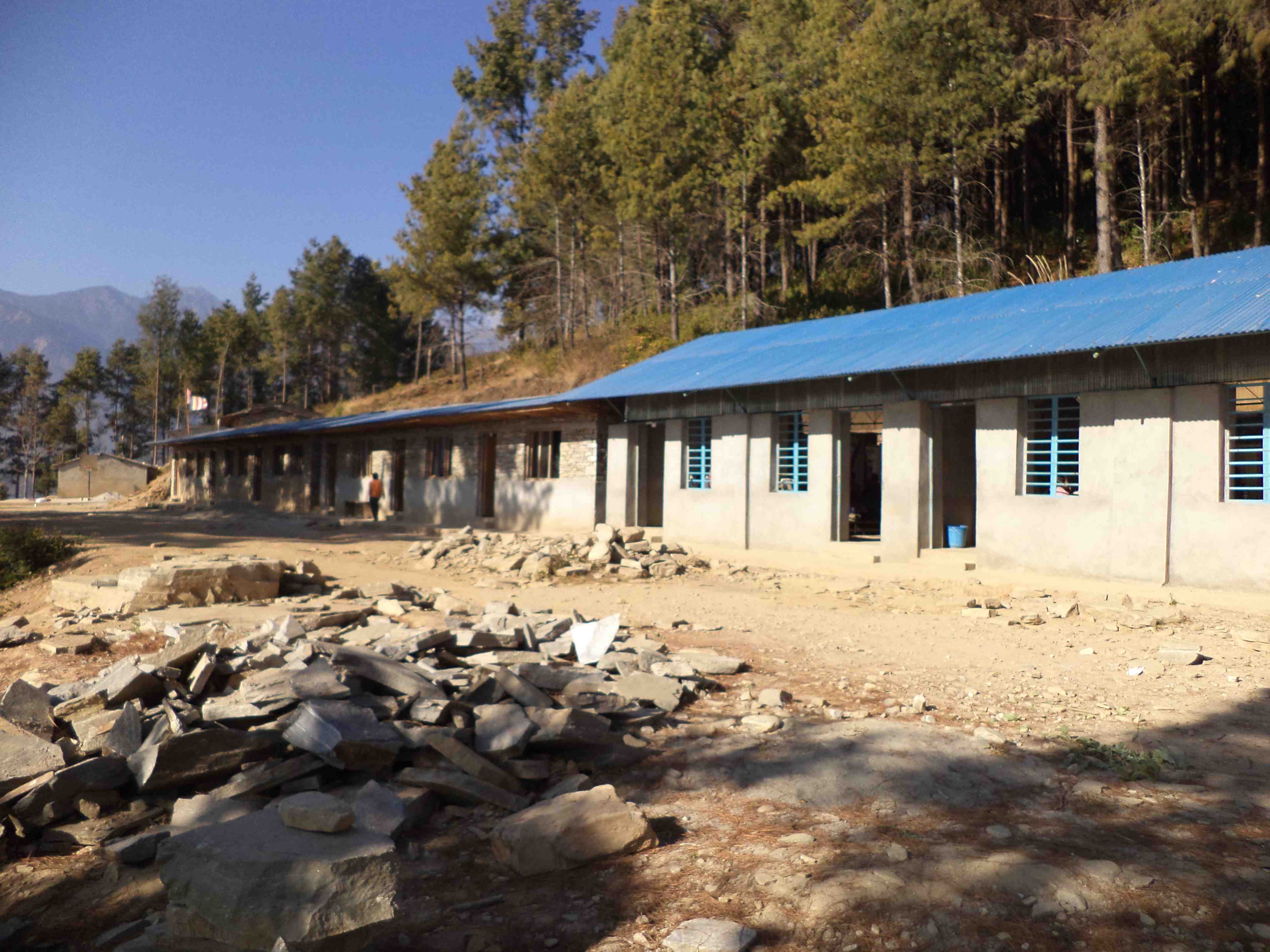 View of the Nurbling School classrooms

My agreement to take on the Nurbling sanitation project is motivated by my belief that education has the ability to make changes and to spread changes like the rippling effects of water.  In order to improve Nepali people’s standard of living systematically, the changes must come from its own people within the country.  Thus, it is my goal to contribute on the project in a way that the school children are not only provided with, but are also taught of, sustainable, environmental-friendly, and hygienic way of living.  I envision that they will in turn become the leaders and the integral movements to continue on improving sanitation and sustainability for their community in the future.

Nurbling is a beautiful mountain village nestled in the Sindhupatchok District of Nepal close to the Tibetan border.  The Nurbling School is sitting on a terrace landscape at an elevation of 2020 meters (6627 ft) overlooking many layers of rolling hills and forests.  There are approximately one hundred children ranging from age 4 to 15 studying in the school.  Due to the long commute distance between home and school, approximately half of the students currently live in the school dormitory as boarding students. 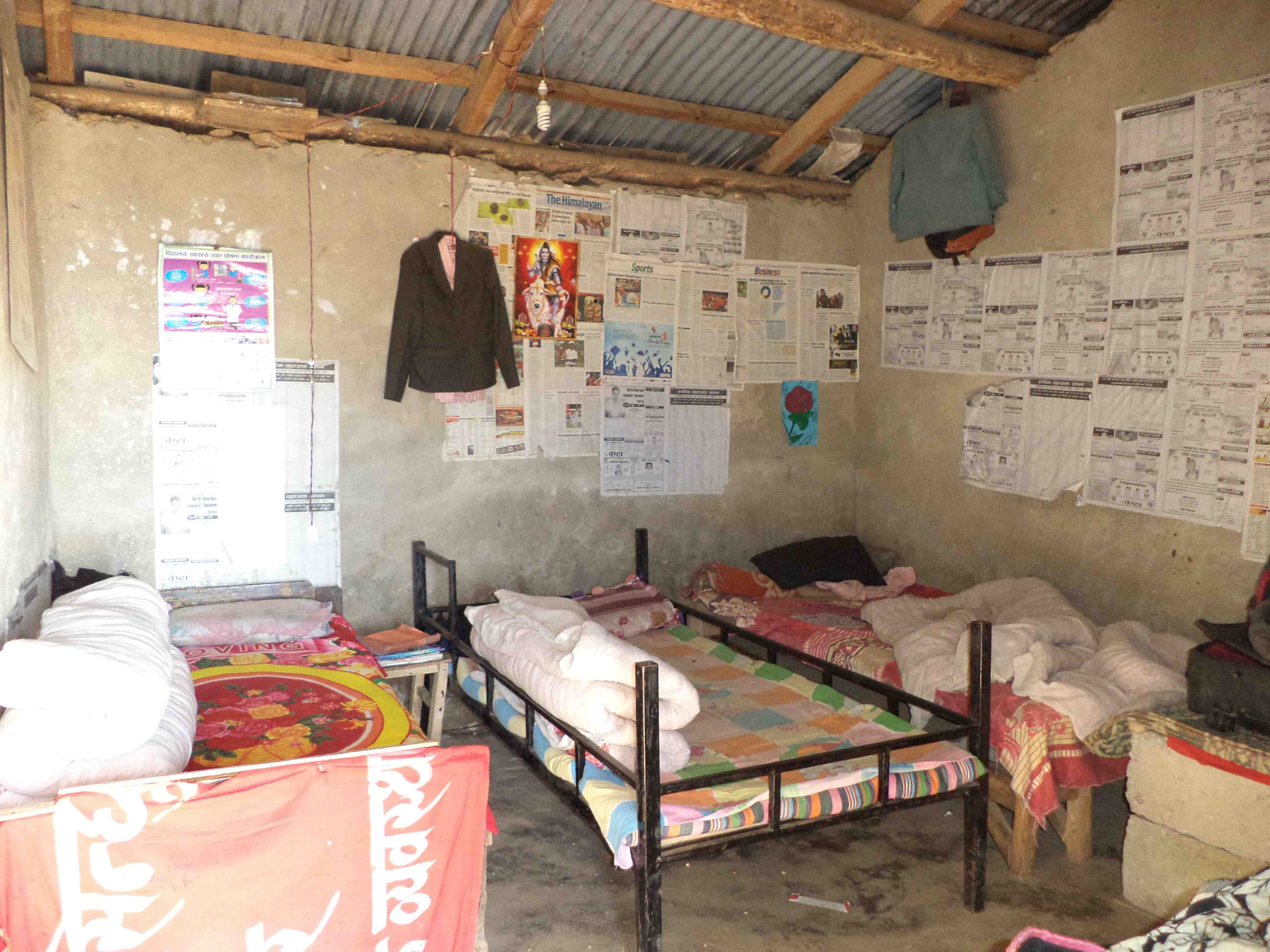 A fairly common practice for setting up toilets in the remote Nepali village is essentially digging a “septic tank”, or more accurately, a hole in the ground lined with rocks and then enclosing the top opening by wood slabs.  Such setup will allow the urine to slowly seep away through the rocks into the soil, and the composting will start.  Similarly, Nurbling School has two existing stalls with a “septic tank” this way, but the toilets have been problematic, as the “septic tank” is often overfilled too quickly not able to keep up the daily usage from about a hundred children.   My goal is to help Nurbling School to come up with a better sanitation facility and waste treatment design that is more sustainable and environmental-friendly. 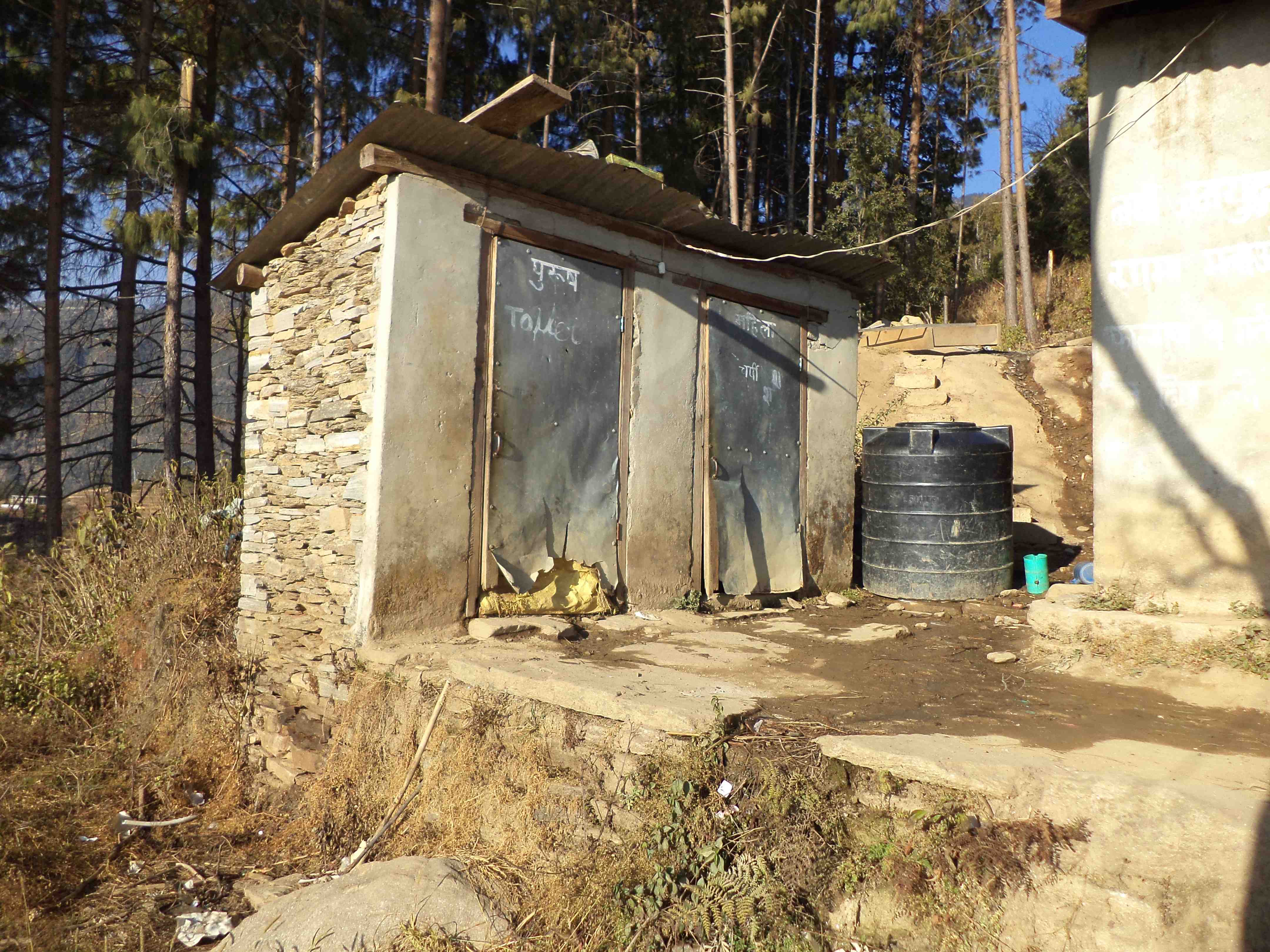 View of the existing toilet facility next to the students’ dormitory

Upon extensive research of different waste treatment alternatives and then consulting with experts including Mr. Joe Jenkins, the author of “Humanure Handbook” and Mr. Rick Chitwood, the Sierra Club’s maintainer for the Phoenix Compost Toilet at Horse Camp of Mt. Shasta, I discovered that the success of compost toilet is largely dependent on proper balancing of carbon, nitrogen, and oxygen.  In another words, it depends on quality of maintenance hours put into mixing compost piles and ensuring proper amount of sawdust, leaves, and food scrapes is mixed with the human waste.  When the carbon, nitrogen, and oxygen are balanced, then an aerobic digestion starts, turning the compost pile back to fertile earth.

Even though the idea of creating an aerobic compost toilet is very sustainable and environmental, many of the compost toilets that have been set up in Nepal have not been successful due to lack of proper maintenance.  The Nurbling school committee also has expressed negative views toward compost toilets, as the school is not financially able to hire a long-term labor for maintaining the compost pile.  Thus, I have been actively seeking for another sustainable alternative for several months.  Thankfully, I got a chance to receive valuable mentorship from Mr. KP Kafle, the founder of Nepal Seed, who highly recommended that I evaluate biogas systems as a possible waste treatment solution.

On December 19th 2012, Chiring Lama, the lead of the sanitation project from the Nurbling School Committee, and I went on a field survey trip to evaluate the feasibility of biogas system in the application of a school waste treatment system.  Regardless of six hours motorbike ride on bumpy dirt road and a sore spine at the end of the day, the visit to a mountain village in the Kavre District was very educational.  Chiring and I were very pleased to see how simple and low maintenance the biogas system can be installed and operated in the field.  The village sits between 2050 meters and 2150 meters (~6890 feet), so its elevation and temperature is similar to that as Nurbling.  It was determined that we have finally targeted a sustainable, environmental-friendly, and hygienic solution for the Nurbling sanitation project. 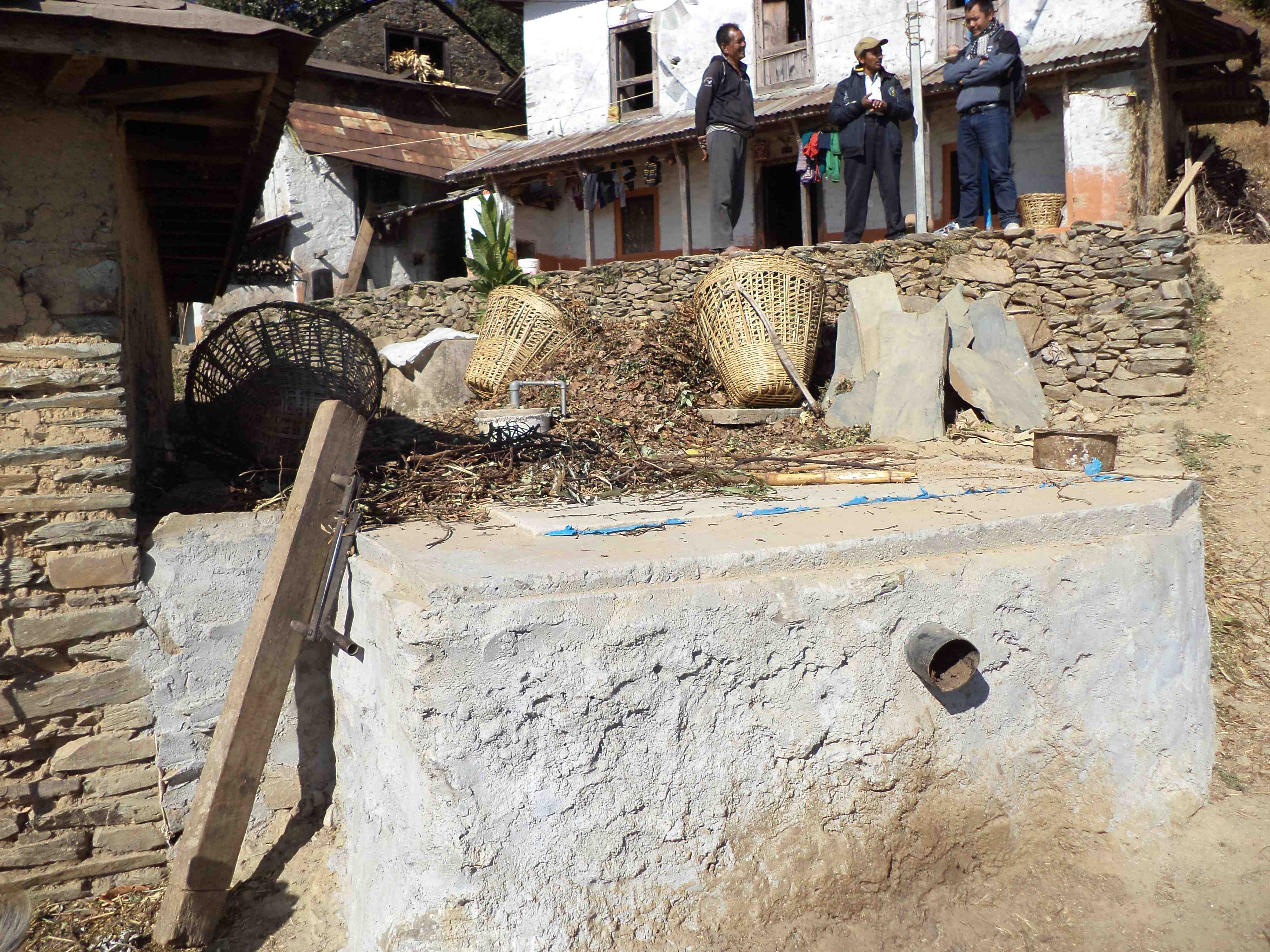 A biogas digestor technology is similar to fermentation, where an oxygen-free environment allows for the conversion of cow dung into methane (50-75%), carbon dioxide (25-45%), and water vapor (2-7%).  Small trace amount of oxygen, nitrogen, ammonia, hydrogen, and hydrogen sulfide can also be created during the digestion.  The bacteria that break down the cow dung and convert it into methane gas and slurry naturally exist in cows’ stomach.  Thus, there must be fresh cow dung in the digestor initially to trigger the methanogenic reaction; and daily addition of fresh cow dung into the digestor can ensure a healthy colony of methanogenic bacteria working all the time. 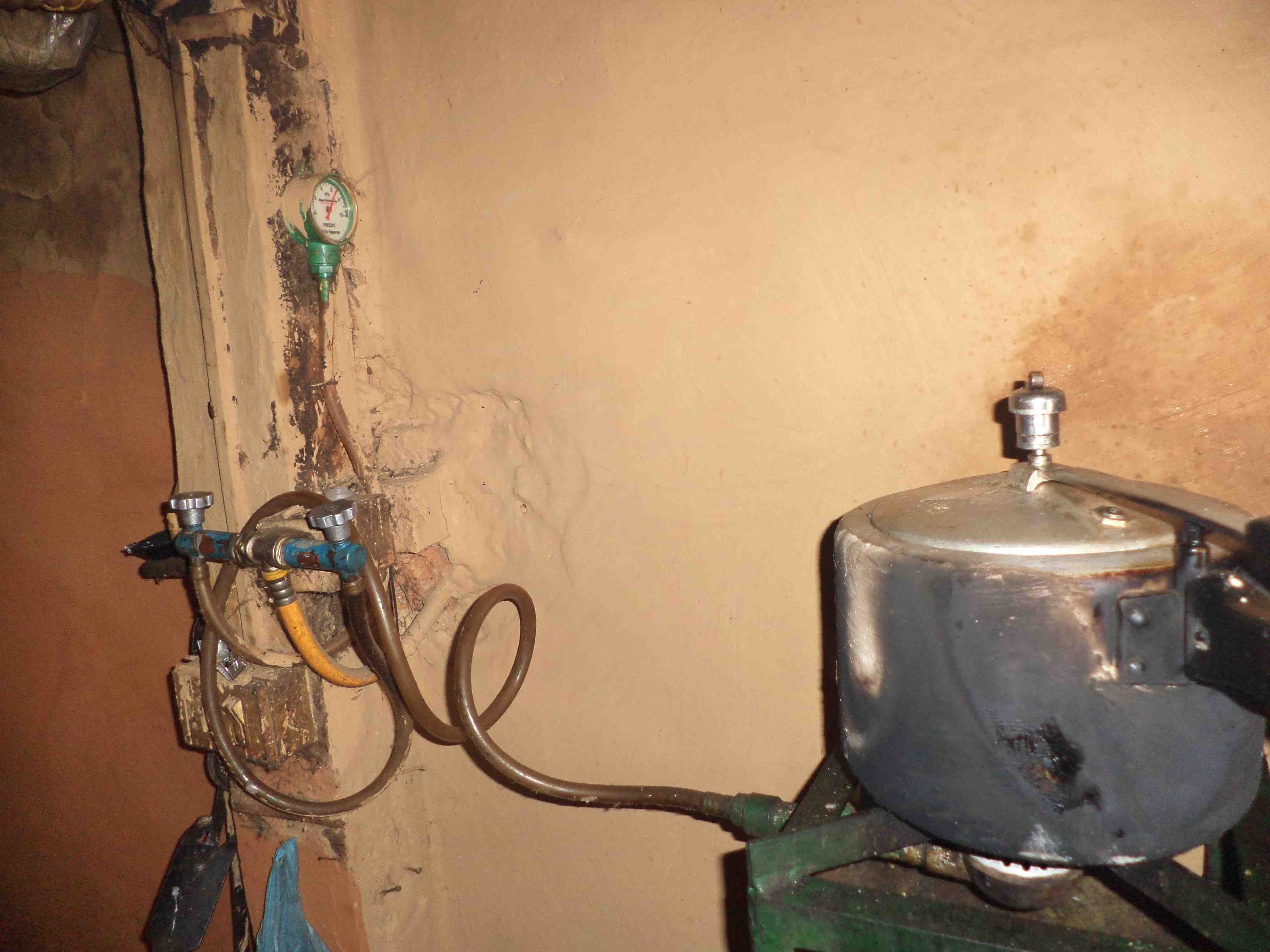 One of the advantages of the biogas system is to utilize methane gas product for cooking which reduces the number of trees being cut down for firewood and the workload spent on collecting firewood.  The slurry stream produced from the digestor should be further mixed with sawdust, leaves, and/or food scraps to decompose down to soil.  The average time of digestion is about 55 days at minimum temperature of 35 degrees Celsius (95 degrees Fahrenheit).  Although the combination of time and temperature is still below the sterilization curve, majority of the pathogen in the slurry will be eliminated during the digestion phase.  To ensure that 100% sterilization of the pathogen, the slurry stream must be diverted into a compost pit for further decomposition. 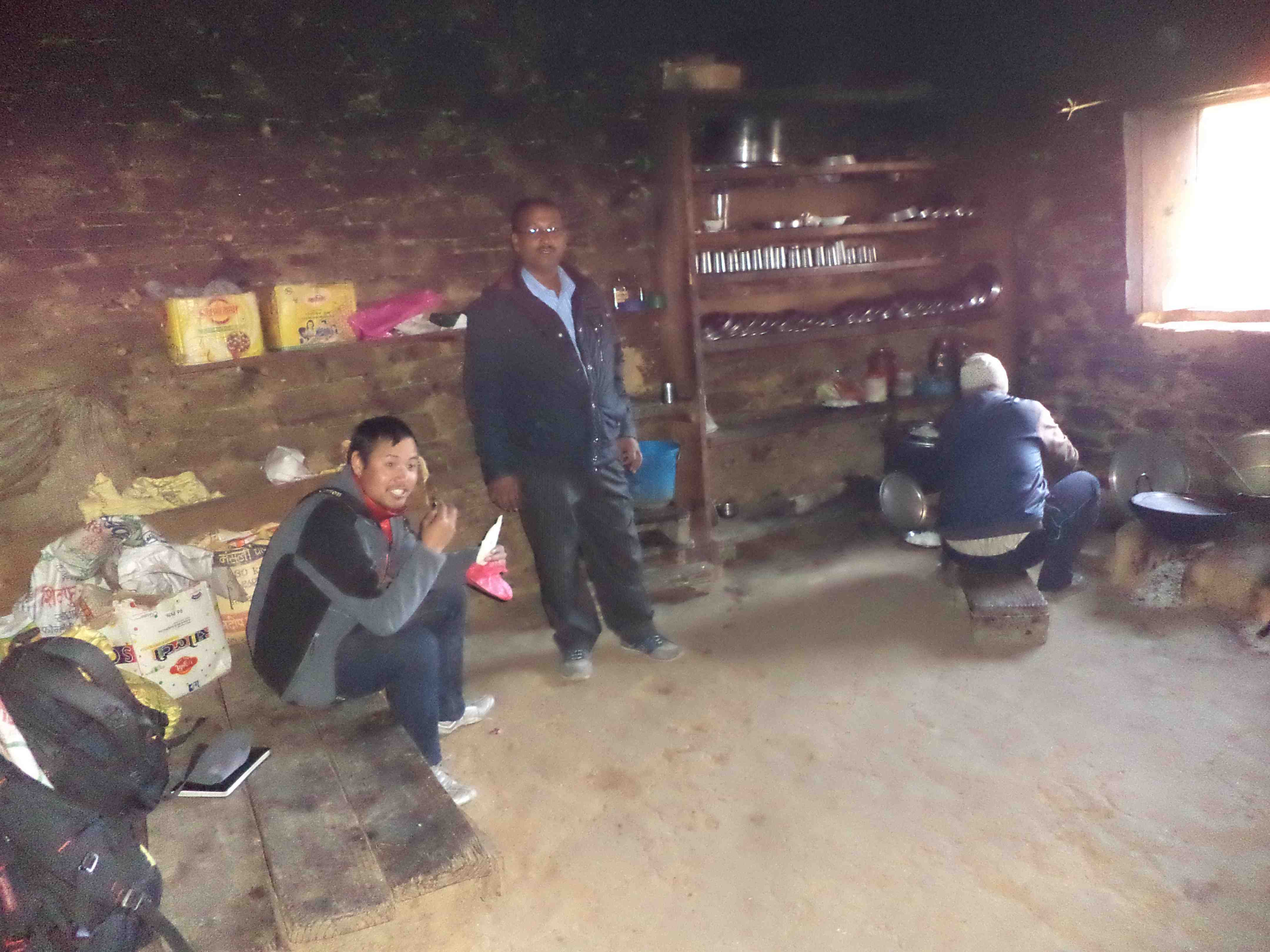 View of the Nurbling School Kitchen

As part of the endeavor to setup a sanitation facility with an associated waste treatment system for the Nurbling School, the science behind the biogas technology must be incorporated in the school curriculum.  It is my goal to assist on starting a long-term science project to initiate the school children’s curiosity for investigating how to effectively produce successful and pathogen-free composting.  The implementation of this science project requires that the temperature of the digestor and the compost pile be monitored regularly as part of the data collection.  If pathogen test is accessible, it is also highly recommended to test the first few batches of the finished compost soil for verifying that the product is pathogen-free and parasite-free.  After all, the heart of science is the methodical approach to solving questions including the following steps:  Questions, Hypothesis, Procedure, Data Collection, Analysis, and Conclusion.  What else can be a better way to learn science than doing it? 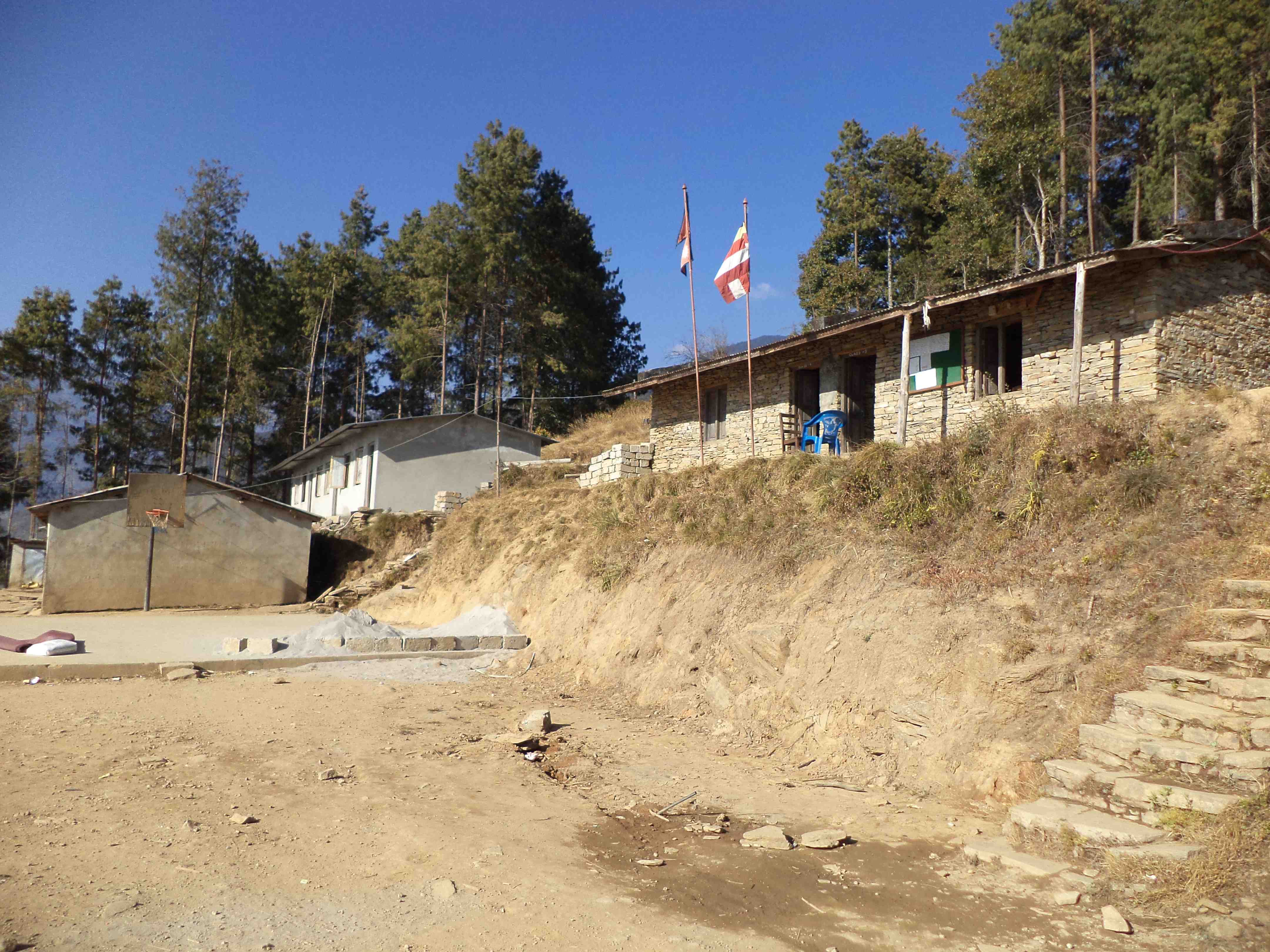 On January 8th 2013, two biogas system experts, Mr. Bikash Adhikari, the Research and Development Manager/ Engineer of Nepal Biogas Promotion Association (NBPA) and Mr. R.B Thapa, accompanied Chiring and I for a site visit at Nurbling School.  During the site survey, we have identified the optimum location to set up the sanitation facility and the biogas system.  It has also been determined that a 6-cubic-meter biogas digestor is most suitable in this application, but the system will also need daily fresh supply of approximately 24 kg of dung which is equivalent to the waste generated by two cows.  The Nurbling School has agreed to partner with local farmers who own cows near the property until the Nurbling School Committee can subsidize two cows for the school through a government program. 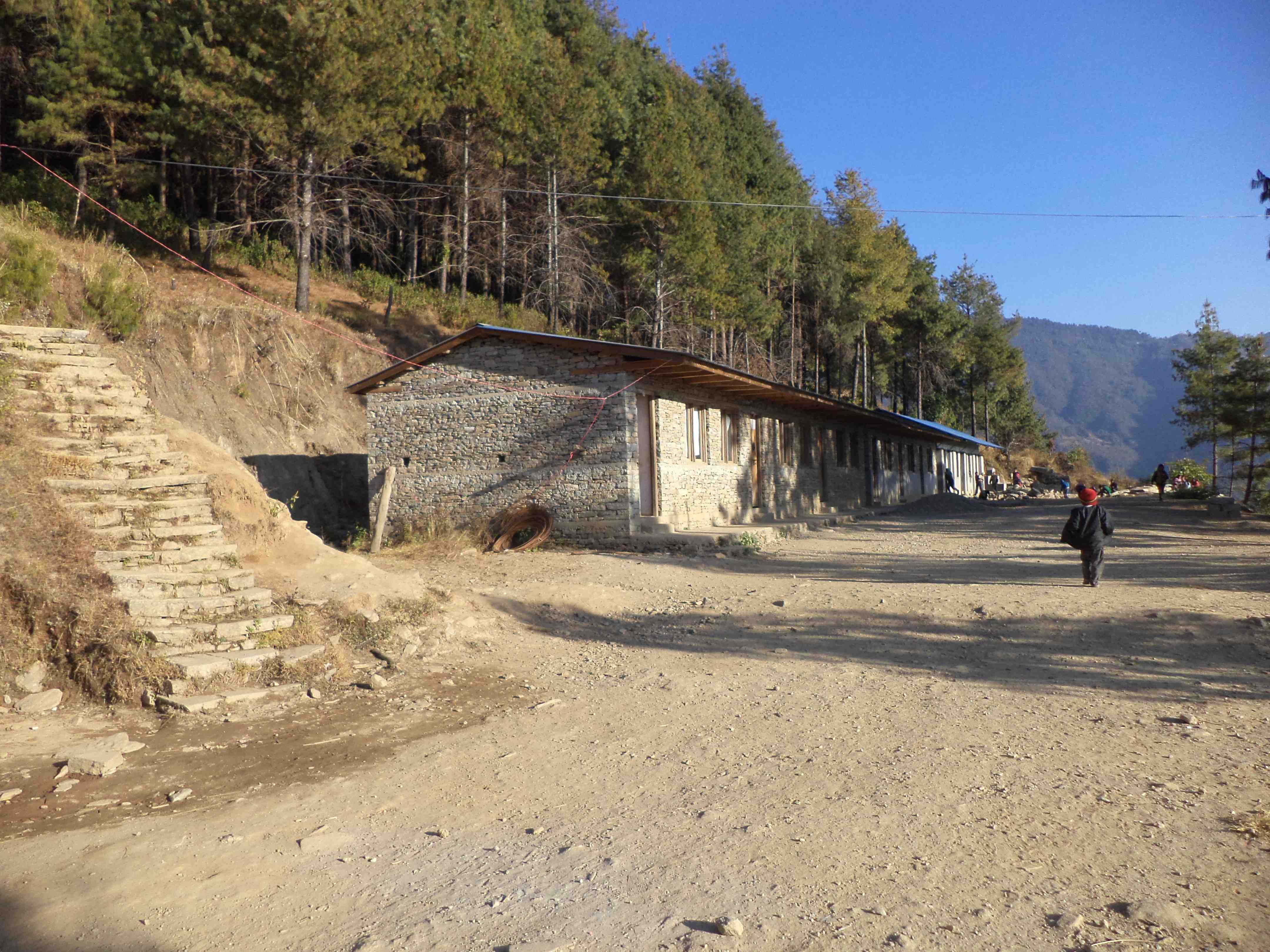 Our goal is to complete the construction during 2013.  NEIO is most gratified by everyone who has supported the project as the installation of the sanitation facility and its associated waste treatment plant is only made possible by all of your amazing contributions.  100% of the money raised from the fundraising events directly goes to the construction.  All the volunteers are non-paid and cover the travel cost and living expenses incurred during the duration of the project themselves.  As for me, I am extremely grateful for having this valuable experience to work with many wonderful people and to contribute for a cause that I strongly believe in.  This volunteer project has also provided me an opportunity to finally exercise my education background as a biochemical engineer as I was away from the biochemical engineering world and had been working as a petroleum engineer in the industry for the past 6 years.

Last but not least, many thanks to Ms. Linda Kentro, the Environmental & Emergency Health Team Leader of USAID/ Nepal, Ms. Rose Li, a registered California professional engineer in civil engineering, and Ms. Nicky Chhetri, a Nepali lady who founded Empowering Women of Nepal (EWN) with her two older sisters.  All of them have contributed their time to provide valuable critiques and guidelines for the design of the sanitation facility project.  Most gratified to Chiring Lama, who has drafted and revised the design many times over.  The modified facility design eliminated the Nepali urinal commonly set up for girls and replaced it with six conventional squatting panes in individual rooms with doors, which provides necessary privacy for school girls who have reached menstrual age.  The sanitation facility design also included two washbasins that will be equipped with soap for hand washing and one shower in each side for boys and girls.  This design aligns with the Sanitation and Hygiene Master Plan issued by the Steering Committee for National Sanitation Action in the Government of Nepal.

My hope is that not only all the children educated in the Nurbling School will all become experts and future leaders on proper sanitation and sustainable living, the Nurbling School itself can become a learning center for other villages and schools of the area to come see and study as a role model.